George Masters of Strand on the Green died in March 1734 and in May a public notary assisted his widowed sister, Rebecca Clements, to prepare an inventory of his property. The document lists his furnishings and utensils, in seven rooms and a yard, followed by his nursery stock, tools and equipment. While the house was relatively sparsely furnished, his gardens were bursting with plants.

In the “seed rooms and other lofts” were old clothing, linen and lumber but no seeds, though bushells of peas and beans were listed elsewhere. The detail of the inventory is valuable in showing the range of plants Masters grew, mixing trees, shrubs and hedging plants with orchard trees and plants for the flower garden. 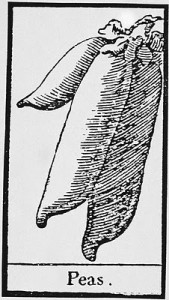 John Harvey found Masters’ name as one of the gardeners who prepared a similar inventory following the death of William Cox of Kew in 1722. Batty Langley, the son of a Twickenham gardener, wrote in New Principles of Gardening in 1728 that Cox was an improver of early peas, a variety “known by the name of Master’s Hots, first raised and improved by an ingenious Gardener and Nursery Man of that name now living in Strand on the Green near Old Brentford”.

Peas were popular in the early 18th century and Masters’ inventory lists six bushells of Hotspur Peas and a further bushell of dwarf peas at 5 shillings a bushell, as well as 12 bushells of garden beans at 2 shillings a bushell, relatively modest quantities. The gardens were not planted with peas for seed when he died. In comparison, John Brooks, a neighbour, bequeathed to his son by his July 1723 will “seven cows & two heifers, seven hoggs, my seed peases worth forty pounds and his mothers books”. At 1734 prices this represents between 135 and 160 bushells of peas.

The inventory describes eleven plots, five on leases and one of these in Acton. More research is needed to confirm their locations but other evidence suggests that most were at London Stile, between today’s Kew Bridge and the High Road junction with Wellesley Road. These garden plots lay among many others in the triangle of rising ground between the riverside village of Strand on the Green on the west, the  road to the west on north and Sutton Lane/Fauconberg Road and Grove Park Terrace to the south east (all London W4 today).

On his 1746 map of London & Environs Rocque shows the gardens with parallel rows of planting, sometimes in squares, and enclosed within walls or hedges to shelter them from the winds which whip across the flat land beside the river. The area was well placed for road and river transport and near to the Brentford & Kew Ferries.

In the “Garden next the Road Walled Round with Bricks” were flowers – six beds of anemones, 5,000 ranunculus, 44 cyclamen, 20 scarlet lichen, 24 double lady smocks, 12 peach-coloured hepaticas at a penny each and four blue at 6 pence each, along with 1,000 small yews and a few large hollies. In “the Great Garden Ground” were 200 striped lilies at three pence each, four thousand jonquils, 1500 Persian Iris at 2 shillings a hundred, 4 beds of double peonies and 600 fraxaneias.

The next three plots have trees, shrubs and hedging plants in large quantities. There were 10,000 quick (small cuttings of hawthorn or hazel) at 3 shillings a thousand, 600 “hedge yews at 3 foot high” at 10 shillings a hundred, 800 small seedling yews, standard elms, 24 roses at a penny each and 100 “lealocks” (lilacs) worth 15 shillings. In addition there were fruit trees: 200 plum stocks, 500 codling stocks and “pairs” (pears), 200 gooseberry plants, 100 redcurrants and 25 mulberry trees.

The “Upper Quarter next the Wall” housed some plants, the stock of seed peas and beans, and a great deal of equipment.  Besides 600 horse chestnuts and 100 English chestnuts together worth £1 and 2,000 honeysuckles worth £5, there were plots of roses, standard elms, and “a parcel of small Orange Stocks in Potts and the Potts” worth 15 shillings.

The equipment included 11 lights for cucumber frames containing about 150 feet of glass at 3d a foot, 48 glasses for melons at 8d a glass, about a thousand paving bricks, 236 sieves and 22 half sieves (market baskets usually in bushell and half-bushell sizes), 16 maunds (baskets with handles), three barges (barrows without wheels), two hand-barrows, four garden ladders, a pair of steps, a harrow and a roller, a drill plough, a swing plough, 100 small garden pots, a water barrow and tub and four watering pots. All of the gardeners must have used large numbers of flower pots and these, together with other useful clay items like weights for fishermen’s nets, were probably made only yards upstream at Mr Trimmer’s brick tile works, or at the pottery in Brentford. 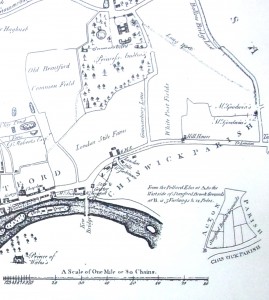 Detail from A Survey of Ealing Parish of 1777

The plot of land in Acton, leased from William Goodwin, held 800 elms at 10 shillings a hundred, 2,000 hornbeams at £5 a thousand and 500 beeches at 10 shillings a hundred. Though it lay in a neighbouring parish, Goodwin’s land was only a short distance eastwards near Turnham Green, on the opposite side of the road from the other plots held by Masters at London Stile, as the map shows.

On 2 acres at Strand on the Green, leased from John Pennar, were 100 pear trees, 25 double flowering whitethorn, 24 single flowering pomegranates, 150 Spanish chestnuts, 100 gooseberry plants, 1,700 small bays, four thousand yews 4 feet high worth £20, 200 grafted plum trees and plots of elm and yew trees. John Pennar or Pinner was a local carpenter who had been admitted to 3 acres of land and five cottages in 1707. In May 1734, after Masters’ death, Pennar surrendered them in the manor court to another gardener, William Compton, one of the heirs of Nicholas Parker.

As George Masters seems not to have left a will we have no details of family bequests or friends who were witnesses. He would certainly have needed labour in his gardens but we have no information about his workforce. However, the family can be reconstructed from other sources. The George who died in 1734 was the son and grandson of men of the same name. The burial of his mother Martha, in 1702, appears in the parish register with a note that she was the wife of George Masters, gardener, confirming that at least two generations were engaged in the gardening trade.

In 1685/6 a George Masters of Chiswick took an 8-year lease on the gardens of Holland House in Kensington, described as the Great Garden and the Kitchen Garden, from Viscount Dunkellin and the Countess of Warwick. He was to cultivate and maintain these gardens, and could house a “servant” in one of the lodges, but he must also allow the family of the aristocratic owners to continue to enjoy the gardens.

It is likely that this George Masters was “our” George’s father, who died in 1707. He was listed in the rate books at the fourth property from the south west end of Strand on the Green in the 1680s, with his father at London Stile from the 1670s. The parish rate books show “our” George signing his name as a vestry member in 1719. He took on his father’s property with the garden ground at Strand on the Green still valued at £24, while his brother Richard was listed 30th from the south west with a house worth £3. Their cousin, Thomas Masters, was at Little Sutton, with property worth £25, where another plot worth £30 was held by Masters and West. Given the huge difference in valuation, it is possible that Richard is rated only for a house and might have worked with George on the family gardens.

Rebecca Clements, born in 1681, married Richard Clements, from a large Isleworth gardening family, in 1708; she was widowed by March 1734 when she prepared her brother’s inventory. August 1734 saw two weddings – George’s daughter, Elizabeth, married Philip Clements while Rebecca married Rice Lewis, gardener to Lord Burlington at Chiswick House. (J H Harvey records that Lewis was one of the prominent gardeners who subscribed to Philip Miller’s Gardener’s Dictionary of 1731.) Rebecca made her will in 1735, describing herself as a gardener. In it she dealt with her own estate from the settlement made at her marriage to Lewis. Her sister Catherine’s husband, Thomas Couchman, a distiller with property in the City of London and on Strand on the Green, was a trustee of the settlement.

When Luke Wetten, the royal confectioner, acquired a house nearby with 6 acres of orchard and gardens in 1772, and a further 4.5 acres of adjoining land in 1774, both properties were said to have been “heretofore occupied”  by George Masters. His relationship to “our” George is not yet clear. The court rolls record that the same property was let to Mr Zoffany, the artist, during 1764-1772. This was probably the adjoining Sydney House rather than London Stile House, but a Masters clearly worked most of the garden ground there.

If you enjoyed this article, please consider sharing it!